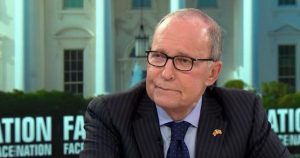 On Thursday, Nov 1 2018, White House economic adviser Larry Kudlow was asked how the Trump administration would respond if democrats pushed for a $15 federal minimum wage. His response was emphatic: “My view is a federal minimum wage is a terrible idea, terrible, and will damage particularly small businesses.To force them to kind of take a payroll increase would be silly. ” he replied. He feels that individual states and private companies should be left to make independent decisions based on local needs and economy. “Idaho is different than New York. Alabama is different than Nebraska,” he said. “That’s why the federal minimum wage doesn’t work for me.” Kudlow supported Amazon’s decision to raise its minimum to $15, saying he “applauded” the move.

Be the first to comment on "Federal Minimum Wage: “a Terrible Idea”"